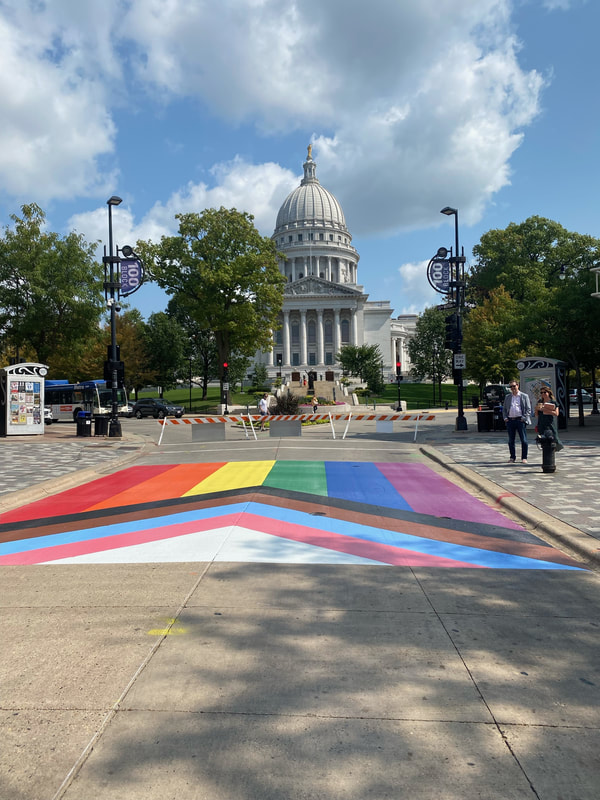 FoMAC raised the funds to support a rainbow pedestrian crossings program (Intersectional LGBTQIA Pride) created by the City of Madison. Since the fall of 2019, Alders Lindsay Lemmer and Patrick Heck have been working with City staff to create a program in which the City will place rainbow crosswalks in Madison if funding for the project is provided by contributions from the community. The City has identified potential areas in the downtown suited for a pilot of the project.

Thank you to all of the donors - list coming soon!

Purpose: To celebrate the contributions of the LGBTQIA community.

Objective: To signal a welcoming and inclusive Madison.

Impact: Thousands LGBTQIA identifying individuals, as well as their families, friends, and allies.

Since 2010, over 20 North American cities have implemented rainbow crosswalks to celebrate their local LGBTQIA community. Many people with such crosswalks in their communities feel they serve as an affirming symbol to the LGBTQIA community and their allies, as well as serving as a metaphor for the journey LGBTQIA people have traveled from discrimination to tolerance and acceptance towards full inclusion and equality.

The LGBTQIA population includes a diverse range of identities, expressions of gender and sexual orientation, race, religion, ethnicity, nationality, and socioeconomic class. This intersectionality provides a diversity of perspectives, and while belonging to the LGBTQIA community can be a source of strength, it also brings unique challenges. According to the National Alliance on Mental Illness, "LGBTQIA adults are more than twice as likely as heterosexual adults to experience a mental health condition." In addition to concerns for mental health, many LGBTQIA individuals are the targets of violence. The Human Rights Campaign has noted that black identifying members of the Transgender and gender non-conforming community experience some of the highest levels of killings, violence, poverty, policing, criminalization, and incarceration of any group in the U.S.

Total needed for pilot project at the top of State Street = $30,000

Donate to the Rainbow Crossings Fund